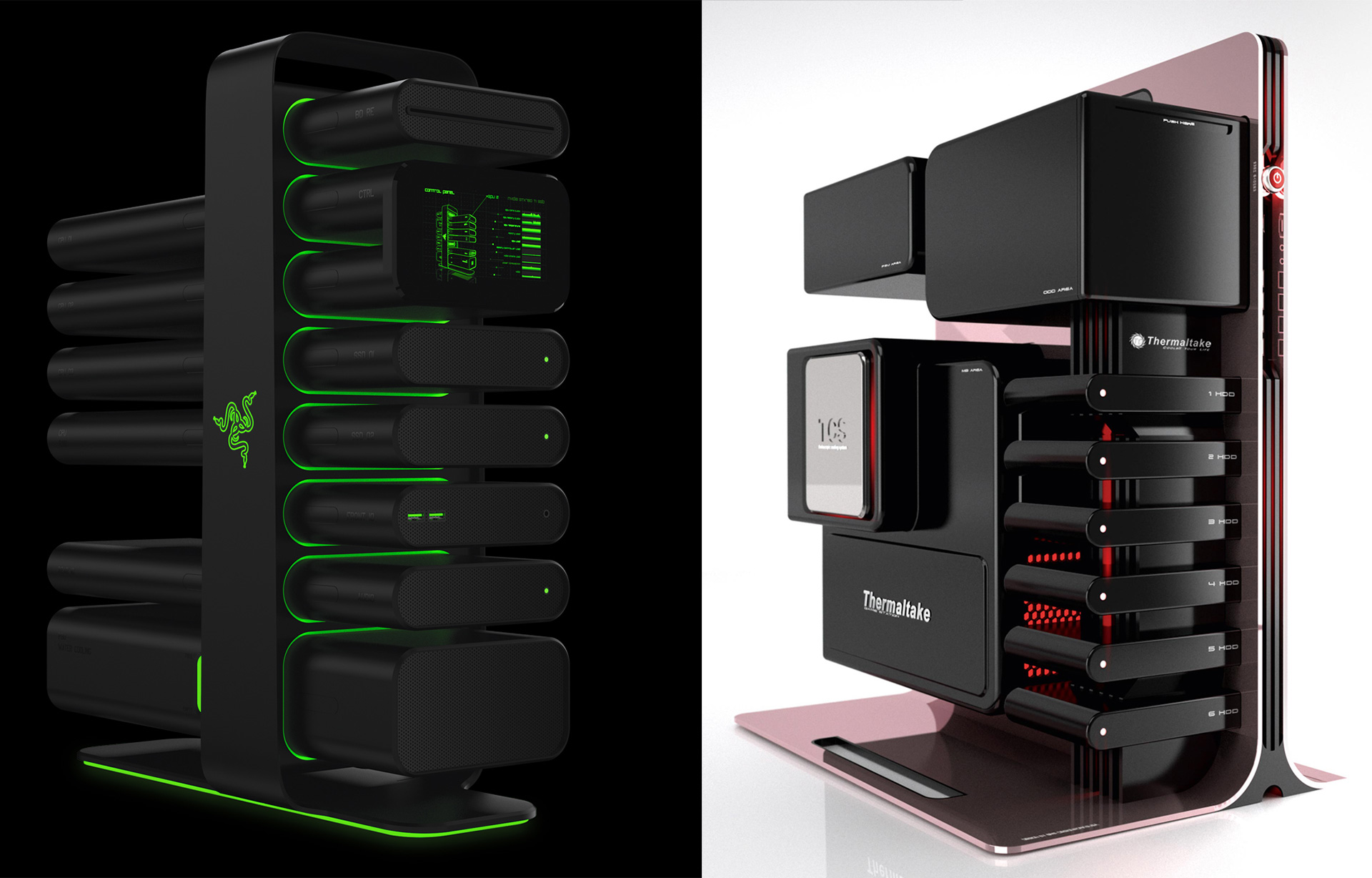 Innovative gaming hardware company Razer rolled out Project Christine, a gorgeous PC prototype at CES 2014, calling it “a revolutionary new concept design.” You might believe that if you’ve forgotten about the Thermaltake Level 10, a computer case design by BMW DesignworksUSA that turned out to be a flash in the pan three years ago.

Now that I’ve gotten that comparison out of the way, let’s take a look at what this Project Christine PC really is and isn’t.

First of all, it’s not available. However, Razer has shown off innovative design concepts at CES and then subsequently shipped something similar, (I’m looking at you, Razer Switchblade laptop of CES 2011), so this could very well turn into a reality sometime soon. I hope it does.

Even though the design is not entirely new, I love it. It’s completely fanless — liquid-cooled with mineral oil — making it theoretically ultra-quiet. It has what Razer calls a “fancy screen” that adds extra coolness by displaying the OSes available to boot, status updates and that iconic Razer logo. And let’s not forget, it can accommodate a quartet of the fastest and most-advanced graphics cards.

Even if you don’t care about all that techie stuff, just look at it. It would fit perfectly on the set of any science-fiction movie. These are high-rez pictures, so I’d suggest you click the double arrow on the upper right of the first graphic to get the full effect: 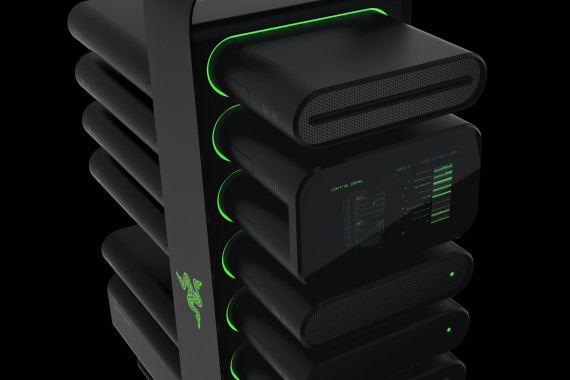 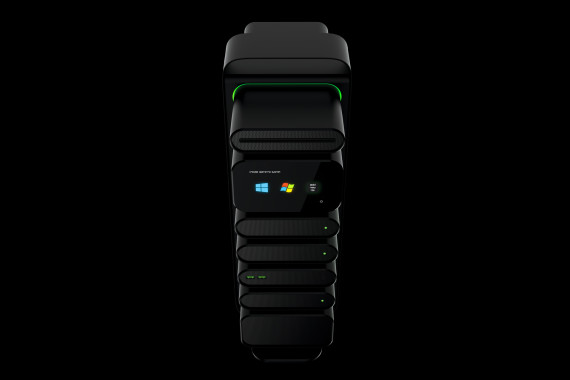 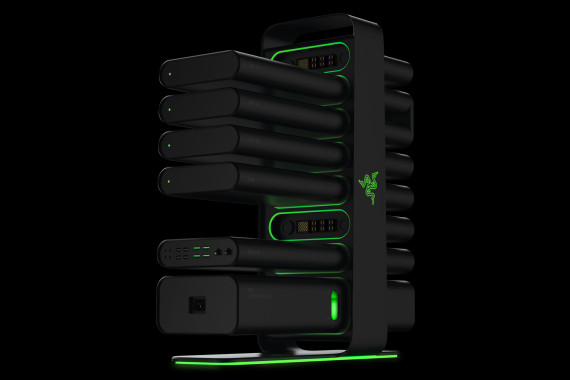 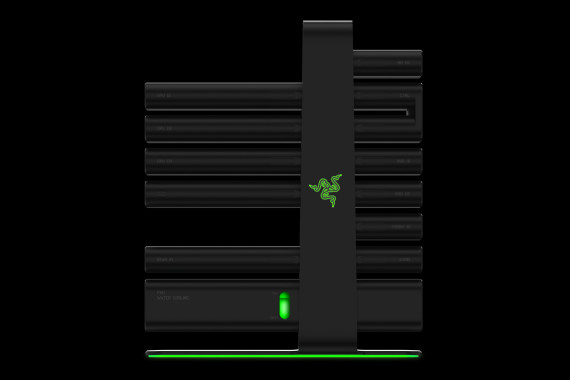 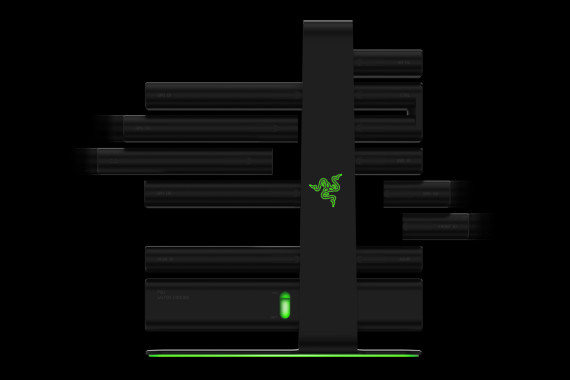 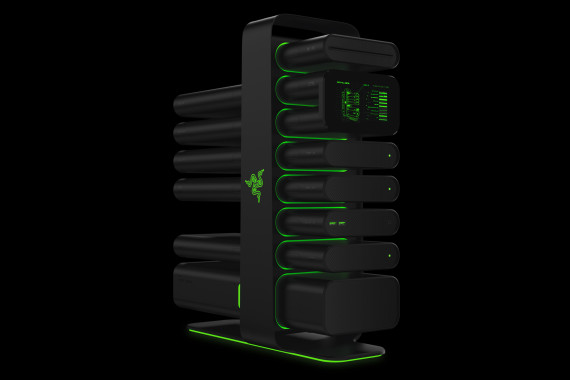 It’s sleight-of-hand on the part of Razer. What the company is actually talking about is a new way to make more money. It’s a subscription service, you see, where you plunk down a hefty monthly fee and then whenever there’s an upgrade in graphics technology, you receive that proprietary module from the company, returning the old one. Then, it’s a simple matter of plug-and-play to immediately begin enjoying the latest graphics technology. instant gratification. That might be a good idea for somebody with more money than brains who is uncomfortable with opening a PC case.

Project Christine’s design seems like a plausible idea, even more lovely and refined than the Thermaltake Level 10 case. But billing a new PC as “modular” and claiming that it’s “revolutionary” is disingenuous. Personal computers have been modular since day one, back when we called them “IBM-compatible.” On the other hand, in keeping with the incessant dumbing down of our society, perhaps the future PC market will be heavily populated by those who don’t know how to open a computer case and replace a graphics card or add a few sticks of RAM.

All that marketing guff aside, I’m thinking this design could be wonderful for those of us who don’t play a lot of PC games. It would look spectacular on the desk of a writer/video editor/Photoshop aficionado like me. But will it be affordable? That Thermaltake Level 10 was exorbitantly expensive when it was available, and now you can’t pick one up for less than $3,500. Even though its flimsy design earned it the disdain of quality mavens, now it’s a collectors’ item.

To answer my question, probably not. Just like the outlandishly but overpriced Mac Pro, a Project Christine PC is probably going to be a luxury item, costing somewhere between the stratospheric range and “if you have to ask, you can’t afford it.” That doesn’t make it any less beautiful, but it does make it inaccessible to most of us 99-percenters.

Nevertheless, I adore its future-forward design, and I can only hope that someday all computers will look this way.