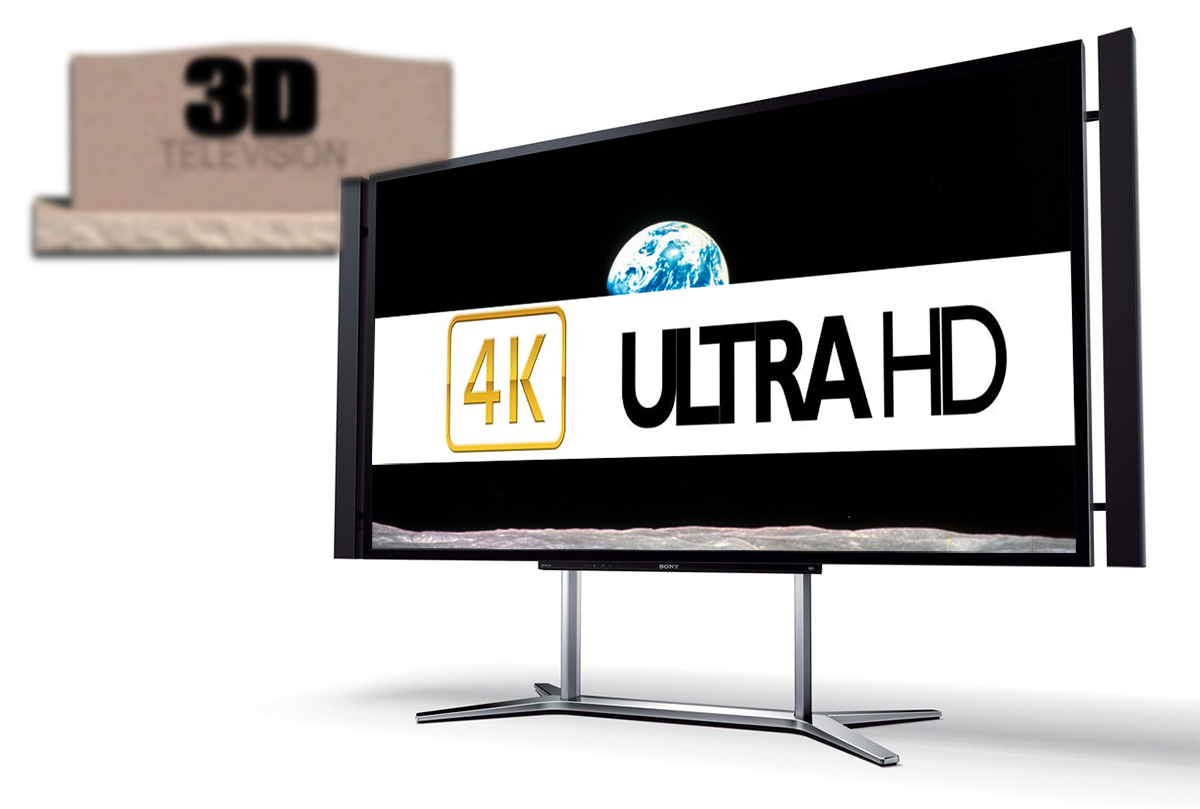 Forlorn about the total failure of 3D HDTV, television manufacturers are now pushing what they hope will be the next big thing: 4K TV. Does this ultra-high definition format matter in the real world?

I’ll split this into three parts: the limitations of what you can see from what distances, my subjective observations from 18 months’ worth of watching an 80-inch 1080p television at a distance of 12 feet, and then the real-world implications of 4K televisions in the living room.

When Apple introduced its Retina display, Steve Jobs reasoned that its resolution matched the limits of what your eye is capable of seeing when holding an iPhone at a typical distance. Translated to a big screen in your living room, you can easily calculate what that distance would be from whatever sized screen you’re watching.

The best online calculator I’ve found for determining whether 4K will benefit you or not was created by ReferenceHomeTheater.com. Wander around with that browser-based calculator, and you’ll quickly begin to understand why TV makers are engaging in hyper-salesmanship based more on corporate profits and than on your enjoyment of high-resolution television entertainment.

From a typical viewing distance, you can’t tell the difference between 4K and 1080p resolution unless you have an enormous screen. For instance, if you bought Vizio’s 50-inch $999 4K HDTV, the ideal viewing distance for you to enjoy that luscious resolution will be 3’8″. Except in extreme cases, such as using such a monitor as a computer screen, that’s not realistic.

Move back to a more comfortable viewing distance — probably somewhere between six and 12 feet away — and you won’t be able to see any difference between that shiny new 4K TV and a 1080p set.

The TV hucksters are hoping you’ll be blown away — as my wife and I were at the local gadget merchant — when you see 4K footage played back on these crispy screens. Chances are, you’ll be standing 3 to 5 feet away when you view them in the showroom for the first time. Interesting that 3’8″ happens to be the ideal viewing distance for a 50- to 60-inch 4K HDTV. But when my wife and I stood back about 12 feet and compared the 4K screens next to the 1080p screens, we could not tell any quality difference whatsoever.

Consider my own experience with an 80-inch Sharp TV we installed here at the Midwest Test Facility 18 months ago. From our 12-foot viewing distance and wearing my new glasses that allow me to see with 20/15 acuity in both eyes, it’s hard enough to tell the difference between 720p and 1080p. Honestly, videos I’ve downloaded at 720p often look just as good as their 1080p counterparts.

There’s another detail that’s even more important, and I notice it often: The quality of content that we watch on Netflix, satellite TV, downloaded video and sometimes even Blu-ray is not good enough for that 1080p monitor. On an 80-inch screen, every flaw is magnified, so much so that occasionally it’s almost unwatchable.

A 4K television would only amplify those flaws even more. The problem is, there is virtually no content for 4K TV yet. You’ll be watching up-rezzed 1080p and 720p video, and they’ll look like shit. Sure, Netflix showed 4K streaming at CES 2014, but that was a mere technology demonstration. Netflix vows to stream 4K next month, with season 2 of House of Cards. Wonderful, but here in the real world, Netflix programming, even at below-720p quality, can barely make its way to our TV set during prime time without stalling. That’s thanks to overzealous downloaders in my neighborhood and crappy broadband provider Time Warner.

The truth is, 4K streaming via Netflix is a pipe dream for most of us, especially with the cheapskate broadband providers that monopolize the United States.

So what does 4K television mean to us in the real world? Not much. Does it matter? Not yet. The best news is, its emergence means that TV manufacturers are working on better technology and making it cheaper. I applaud that. The downside is that although these lovely TV sets look great in showrooms displaying uncompressed 4K content that requires hundreds of gigabytes of storage even for short segments, it’s going to be a long time until such content is practical in your home.

Worse, when that content is finally available, unless you’re sitting very close to your TV or have a 120-inch screen, you won’t be able to tell the difference.